In 1907, when Leo Baekeland first invented fully synthetic plastic, humankind was in absolute awe. It was a revolutionary creation. We had finally found something that didn’t include natural products. It was faster to create, light in size, and looked much better. Since then, nearly everything produced by humans included this component.

Today, from a simple bottle cap to large complex computer networks, plastic is present in almost every manufactured item.

However, everything has its downsides, and plastic is not an exclusion. Waste products of plastic are one of the biggest concerns of the present era. We were so obsessed with the new-found technology that we chose to ignore the fact that it is mostly non-degradable.

It means that almost every plastic we ever made still exists. It is either present as macroplastic fragments or microplastic particles. Tons of these waste products are being thrown off on lands and underwater each year, massively contaminating our environment.

Out of these, microplastic is most dangerous to us. We are consuming it from numerous sources, including our drinking water.

With that in mind, let’s get to know more about microplastics, their sources, effects, and ways to remove them from our drinking water.

Microplastics, by definition, are plastic particles smaller than 5 millimeters in size.

They are of two types:

The sources of it comprise of paints, tires, clothing, plastic pellets used in industries, and plastic containers, etc.

The waste of such items pollutes our lands and seas. From there, it finds its way to our homes via water or through marine food, and sea salt, etc

Whether these materials had harmful effects on our body or not, it always remained a topic of debate in the past. However, recent studies and detailed researches have found many dangerous effects of these substances on our health.

Some of these effects are due to:

It is a common type of plastic used to make durable items such as water bottles. After some period, it starts to leach antimony into the water, resulting in nausea, abdominal pain, etc.

It also breaks down into various components, which may act as carcinogens and hormone disruptors.

Mostly used in the packaging of food, it causes breast cancer, testicular cancer, early puberty, and deformity of the reproductive tract. These effects usually occur when the water is heated, such as in boiling or cooking.

It helps in the production of plastic wrappers, toys, jackets, and plumbing pipes. Components such as dioxins or DHEP, when leached into the water, may disrupt our hormonal system and cause reproductive and developmental problems along with cancer.

Phthalates components of PVC, such as DHEP and DBP, cause behavioral effects and neurotoxicity. Additionally, at a young age, these are also linked to reduction in intelligence, memory, and attention.

BPA is an ingredient of hard plastics and is responsible for causing many disorders. According to research, even small amounts of this chemical is enough to cause many complications, such as cardiovascular diseases, obesity, diabetes, liver abnormalities, etc.

It is found to be another hormonal disruptor and causes disturbances in activities of thyroid hormone and pituitary hormones. Both of these hormones influence many functions of our body, including metabolism, reproduction, development, and immunity.

Microplastics also bind with other non-plastic chemicals, which are quite harmful to us.

These include organic pollutants, which cause a variety of diseases, ranging from neurological abnormalities to some birth-defects and cancers.

Many heavy metals, such as antimony, arsenic, cadmium, and manganese, are used in the production of these plastics. As the affinity of the plastics for heavy metals is high, they retain them even after being degraded to microparticles.

This way, these plastic bound metals can also get into our drinking water and cause multiple types of toxicities and cancers, depending upon the metal involved.

Effects on the Environment

Microplastic pollution is one of the most severe problems of the present, as well as the future. We are producing over 300 million tons of plastic per year. It is contaminating our lands and immensely ruining our marine life.

Furthermore, its particles are ingested by humans in many ways, resulting in all sorts of diseases.

We do not currently have many possible solutions to eradicate this pollution. For now, all we can do is to produce less amount of plastic and decrease its waste as much as possible. Hopefully, in the future, we can replace it with something better and fully degradable.

Thankfully, we can still save our house water by filtering it off of these particles.

Since boiling may further concentrate these particles in water, it may not be a suitable option.

In contrast, a water filter can be a better choice here.

The problem is, however, not all water filters are capable of removing microplastics.

Since microplastics are less than 5 mm in size, any water filter that can remove such sized particles will do the work.

A good quality reverse osmosis filter may be a great option, as some of these can filter particles as small as 0.001 microns.

Under-the-sink filter, such as the Home Master TMAFC Water Filter System, is also a smart choice. They are easy to install, require less space, and can filter up to 98% of the particles.

In conclusion, microplastic pollution is a topic of significant concern. Its quantity is massively increasing as each day passes, while its waste product is going nowhere. It has become a slow poison that is gradually killing our environment.

Nevertheless, we can still save ourselves by being conscious of the water we are drinking and installing a quality water filter in our house.

For further information, you can check the comparison between different types of water filters or have a look at the best reverse osmosis filters. 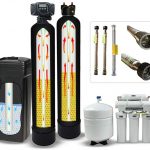