For thousands of centuries, humankind has been surprising historians and analytics over how intelligent of a race it is. Furthermore, this intelligence kept exponentially growing with every advancement in technology.
We have built ships, cameras, planes, fighting jets, bullet trains, computers, and whatnot.
However, when it comes to our survival, we still depend upon our primitive senses and instincts.
One of these senses is our ability to smell and differentiate different odors. It has been helping us in avoiding poisonous and spoiled food since the start of our existence.
The same principle also applies to the smell of water, which in its purest form, is an odorless entity.
If the water contains impurities, it often gives a particular smell depending upon the contaminant. These pollutants are not only bad for our drinking experience, but they may also impart harm to our health.
However, the same smell that ruins our drinking experience can also help us in the identification of the contaminant. Today, we will learn about some of these odors, and the identification and removal of pollutants that produce these odors.

Types of Odor in Water

This type of odor is produced by liquid chemicals that find their way into your water supply. One of the most common causes behind this smell is chlorine. This element is added into our water by municipal authorities to disinfect microorganisms.
However, they often overdo this process, resulting in an excess of chlorine in your water. It gives us a bad smell, bad taste, and can cause respiratory and gastrointestinal illnesses.

As the name suggests, this type of odor occurs due to the presence of metals in water. These metals mostly include zinc, iron, manganese, etc.  These elements are not lethal unless they are present in large amounts.
However, they clog the water pipes, leave stains over utensils and clothes, and damage electrical appliances.

Sulfur is the common cause behind the rotten egg smell.
Its sources include:

Sulfur producing bacteria grows inside water drainage systems and water wells. In drains, the accumulation of soaps, hair, and food particles serve as food for these bacteria. They eat these for energy and produce sulfur as a by-product.

In developed countries, the sewage system consists of network pipelines that drain the sewage away from the population.
Often, this sewage leaks out of the pipes and mixes up with the clean water pipelines. As a result, sewage like smell comes from the water.
This is quite a dangerous situation as it causes many life-threatening bacteria to leak into the water pipes along with the sewage. Beware, this type of contamination can be life-threatening and requires an urgent fix!

Stop using your water right this instance if it smells like gasoline, petrol, or anything similar.

These odors may be due to:

The smell of petroleum and fuel in your water is a rare but dangerous scenario. It can cause anemia, respiratory problems, gastrointestinal problems, collapse, coma, and death. As a good citizen, you should report this problem to officials as soon as possible.

This odor is similar to cooking gas odor. The water wells that are built over oil fields or contain naturally decaying organic substances may have this odor. Methane is an explosive and poisonous gas and requires professional assistance for its removal.

These odors are typically caused by leaching of pesticides and other chemicals into the groundwater. They can cause nervous disorders, blood diseases, kidney and liver damage, reproductive disorders, and cancer.

Locating the Source of Odor

The University of Georgia proposes a simple yet effective method to determine the source of the smell in the water.

Identification of the Cause of Smell

After observing the type of smell, we have to confirm its cause.
If you think your water contains petroleum, sewage, or pesticides, then you should take some water samples to water testing laboratories.
However, if you are observing metallic or bleach-like odor, we suggest you buy a water testing kit.
Water testing kits are cheap, efficient, and save you from multiple lab visits.

The best way to resolve the issue of smelly water is to install a water filter that has carbon or activated charcoal membranes.
If the smell is coming from a particular faucet, you can save money and buy a faucet filter instead.
If it is coming from the faucets of a particular pipe, install an inline or a reverse osmosis filter.
And finally, if all the water in your house smells aberrant, install a whole house water filter.
These filters are fast, competent, and make sure that the impurities producing those smells do not pass into your glass of water.
As a result, you enjoy a pleasing and pure glass of water, free from any metallic or bleachy smell.
For further information over these filters, check out our comparison between top-class home water filters! 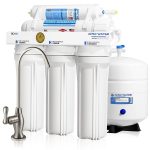